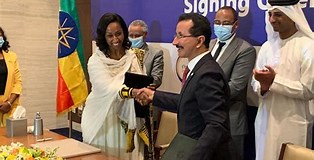 Infrastructure will be developed to build dry ports, silos, warehouses, container yards and other facilities 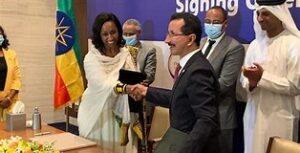 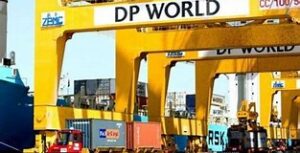 Dubai-based ports operator DP World and Ethiopia’s Ministry of Transport signed an agreement to develop the road linking Ethiopia to Berbera in Somaliland into a trade and logistics corridor.

DP World and its partners plan to invest up to $1 billion over the next 10 years to develop supply chain infrastructure along the corridor, the company said in a statement on Thursday. This will include dry ports, silos, warehouses, container yards, cool and cold chain depots, freight forwarding and clearing activities, the company said.

The agreement was signed in Addis Ababa on Thursday by Dagmawit Moges, Ethiopia’s Minister of Transport and Sultan Bin Sulayem, DP World’s chairman and chief executive.

“We believe that developing the Berbera corridor into one of the major trade and logistics corridors will unlock huge economic benefits for Ethiopia and support its ambitious development plans,” Mr Bin Sulayem said.

“It will create new jobs, attract new businesses and investment along the corridor, as well as diversify and strengthen the country’s access to international trade by having a direct, seamless and efficient link between Ethiopia and Berbera Port.”

Global trade is set to improve after a rebound in the second half of last year due to pent-up demand for consumer durables from advanced economies, the International Monetary Fund said last month.

Trade is forecast to expand 8.4 per cent this year and 6.5 per cent next year after shrinking 8.5 per cent in 2020, according to the Washington-based lender’s estimates.

DP World’s agreement with the Ethiopian government proposes that the two entities establish a joint venture logistics company to carry out logistics operations from origin to destination. DP World will offer export services from origin in Ethiopia to Berbera Port. It will also provide import services from the port of loading to the delivery of shipments, the statement said.

Ethiopia’s transport ministry will review and resolve regulatory obstacles on the Ethiopian side of the Berbera Corridor to facilitate smooth operations for logistics companies, the statement said.

“Ethiopia aims to diversify its port access facilities and services to improve its trade corridor access routes; utilising the Berbera corridor will have a potential to make Ethiopia a front-runner in logistics operations, boosting the competitive advantage of delivering our products to the world market,” Ms Moges said.

Ethiopia will also implement state-of-the-art IT infrastructure and technology along the corridor to ensure the secure transfer of cargo, DP World said.

The ports operator committed to investing up to $442 million to develop and expand Berbera Port, with the first phase nearly completed. Further work is under way on the expansion of the quay to 1,000 metres, which will increase capacity to 2 million TEUs (twenty foot-equivalent units), operated by 10 quay cranes.

The road that will connect Berbera Port to Wajaale on Ethiopia’s border, funded by the Abu Dhabi Fund for Development and the UK’s Department for International Development, is expected to be completed by the end of 2021, the statement added.