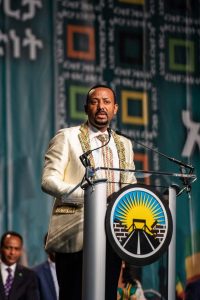 After a year of political upheaval and mass protests, Ethiopia’s autocratic government has been suggesting that it might be willing to transform its elections-for-show into elections that are genuinely free and fair. Within the past year, the government has freed its political prisoners. Its prime minister resigned. The ruling coalition held its first-ever contested elections to replace him — and selected the protesters’ choice of Abiy Ahmed, the first time that a prime minister had come from the Oromo ethnic group.

In July, while visiting Washington, Abiy told a group of thousands of expatriate Ethiopian dissidents that his “ultimate goal is to ensure that a democratic election takes place in Ethiopia.”

But many obstacles block that path. Here’s what has to happen before Ethiopia can hold a truly democratic election.

In the early 1990s, the Ethiopian People’s Revolutionary Democratic Front (EPRDF) overthrew the communist military regime — and has kept itself in power since. A coalition of several ethnic groups that was controlled by the ethnic minority Tigray People’s Liberation Front (TPLF), the EPRDF party has stunted political opposition by jailing dissidents, coercing citizens into joining the party and reportedly committing electoral fraud. Its regular elections thus have not shaken its widespread reputation as an authoritarian state.

To hold truly competitive elections in 2020, Ethiopia may need to repeal certain oppressive laws and stop the EPRDF from siphoning off state resources to distribute to its supporters in exchange for power. At the same time, the coalition party must manage hard-liners within the coalition to prevent them from undermining efforts at democracy, as suggested by political scientist Milan Svolik’s work on authoritarian governance.

[Why is Ethiopia in upheaval? This brief history explains a lot.]

In 2005, after the EPRDF liberalized the country’s political landscape, two opposition coalitions won an unprecedented number of seats, together gaining about a quarter of the seats in the national Parliament. Although the EPRDF remained in power, it cracked down again. The government detained opposition politicians and sent security forces to fire on protesters. Further, it passed laws that criminalized dissent and changed the country’s electoral system to give itself more likely seats.

As part of the crackdown, the EPRDF passed two notably repressive laws. The 2009 Charities and Societies Act prohibited any organization from funding its human rights work by receiving more than 10 percent of that budget from abroad. The 2009 Anti-Terrorism Proclamation uses what human rights groups consider an “an overly broad and vague definition of terrorism” to curtail freedom of speech, allowing the government to arrest citizens for criticizing the government.

The ruling party used the Charities and Societies law to harass groups such as the Ethiopian Women Lawyers Association and the Human Rights Council, even freezing their bank accounts. It used the Anti-Terrorism Proclamation to silence journalists, political opposition members and dissident bloggers. Abiy has begun talks to reform or repeal both of these laws.

After the troubled 2005 elections, the government delayed the country’s regional and local elections for two years. In that time, the EPRDF expanded its party membership fourfold through a combination of carrots and sticks. The party also increased the number of elected local positions, diluting the political opposition’s power, since it didn’t have enough people to run for every seat.

As a result, in the 2008 elections, the EPRDF won more than 99.9 percent of the 3.5 million positions governing the local positions in the kebele (the smallest administrative unit, akin to a neighborhood) and woreda (district) elections. These officials distribute government goods such as seeds, fertilizer, credit and other agricultural basics — and are in charge of community courts, local prisons and sometimes local militia. That means that local EPRDF officials could reward supporters and punish opponents — either by offering or refusing goods, or implicitly threatening police monitoring and harassment.

And according to a Human Rights Watch investigation, that’s what happened. Kebele officials discriminated against those who were not members of the EPRDF.

This pattern of patronage has made it difficult to build successful opposition parties, since the opposition could neither reward party loyalty nor protect against punishment, as the EPRDF could. If the EPRDF wants competitive democratic elections, it would have to dismantle this government-backed system of patronage and punishment. But the tentative reform agenda Abiy has put forward has already disturbed some powerful party insiders.

Abiy’s promises have been greeted by jubilant crowds in Ethiopia and internationally. But to succeed, he has to bring along the rest of his ruling coalition.

[Did someone try to assassinate Ethiopia’s new prime minister? Here’s what you need to know.]

And observers say that the TPLF opposes Abiy’s efforts to untangle the party’s involvement with certain industries and economic sectors controlled by the party, and which party members have used to line their pockets or reward “military cronies.” The TPLF could block reforms — serving as what political scientist George Tsebelis calls a “veto player.”

The anti-government protests have wrought serious change and may have the infrastructure to start building healthy opposition parties. But they’re not fully developed yet. After decades of being shut out of power, jailed, silenced and attacked, they aren’t yet able to compete fairly with the well-resourced and dominant EPRDF.

If Abiy or the international community want free and fair elections, they need to invest in and help political dissidents who are trying to build political parties and end the local administrative monopoly on government support. And as political scientist Stephen Brown showed a decade ago, the international community can’t build democracy in the face of active government repression and domestic conditions that discourage competition.

The possibility of free, fair and competitive elections in Ethiopia depends on how dedicated the EPRDF may be to dismantling the barriers it has spent decades building up.

Correction: Because of an editing error, an earlier version of this article said that Abiy was the first non-Tigrayan prime minister since the rise of the EPRDF. That is incorrect; he is the first Oromo prime minister. We regret the error.